Nextdoor is a private social network. Mr. Schrader has not attempted to communicate this message to the neighbors in the immediate vicinity of the Earthquake Shack. We only know what he said in his message because friends forwarded it to us.

Some of the dubious statements in Mr. Schrader's message:

●  Mr. Schrader claims that "No plan has been submitted to the city for a permit to demolish or build a new house yet."

In fact, Mr. Schrader submitted an "Application Packet for Environmental Evaluation" to the Planning Department, which states that he wants to demolish the existing home.  This application is reproduced below, so you don't have to take our word for it. See pages 3, 4 and 5.

In addition, Mr. Schrader unambiguously told us at a pre-application meeting on March 7 that he was in the process of getting permission from the City to demolish the existing home.

In fact, the application Mr. Schrader submitted states that the size of his proposed project is 5,152 square feet. Again, see the application below. Look at pages 4 and 7.

●  Mr. Schrader claims that his "design is a typical 2 story over garage level home as seen from the street."

●  Mr. Schrader says that the current home is "uninhabitable."  He claims that if he doesn't get his way, the existing home will become "a squatters paradise."

In fact, Bill and Mae Harvey lived in this home for decades. If they were still alive, they would be surprised to learn that they had spent all those years in an "uninhabitable" home.

The home is currently occupied. Mr. Schrader told us at the pre-application meeting that a "friend" of his is living there.

We could go on, but what would be the point? Mr. Schrader's Nextdoor message has only succeeded in demonstrating that he and the truth are not good friends.

In his message, Mr. Schrader states that he has gotten a "verbal opinion" from the Planning Department that the Earthquake Shack "does have historical value and they want to save it."

Mr. Schrader makes a new proposal in his Nextdoor message. He suggests moving the Earthquake Shack to "a free standing area in the rear yard." It is hard to take this proposal seriously.

The purpose of preserving the Earthquake Shack is so that it can be seen and appreciated. Putting it in the backyard would hide it from everybody except a handful of neighbors.

And by what stretch of the imagination does Mr. Schrader think that anyone would agree to put a building in the rear yard, which is supposed to be preserved as open space in the interior of the block?

Mr. Schrader knew what he was getting into when he bought this property.  He knew that he was buying an Earthquake Shack that has been officially designated as an Historical Resource.

Apparently Mr. Schrader thought that he could just bulldoze the neighbors and the Planning Department into allowing him to demolish the Earthquake Shack, so that he could make a mint by victimizing the neighborhood and San Francisco with his monster house project.

Now that he finds out that he may not get his way, he is acting like he is the victim.

Mr. Schrader would be well advised to withdraw his proposal to demolish the Earthquake Shack, recognize that his responsibilty as the owner of this Historic Resource is to preserve it, resolve to deal with the neighborhood in a more honest fashion, and look for real solutions.

This is the Application Packet that Mr. Schrader submitted to the Planning Department: 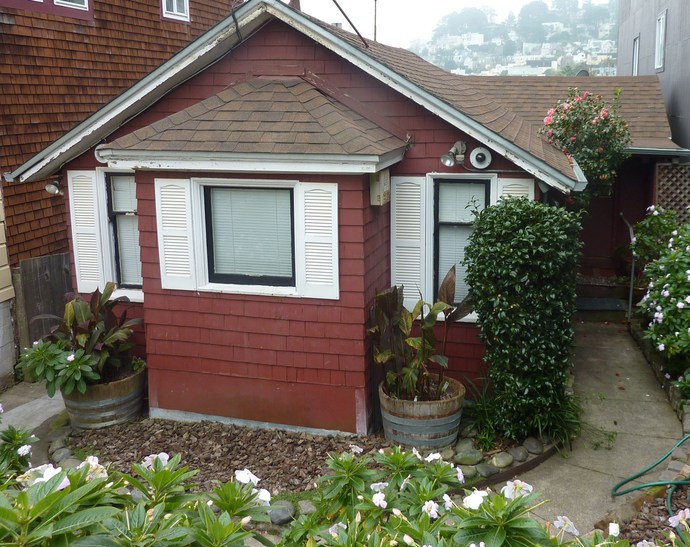