Save the Valley Street Earthquake Shacks!

San Francisco Heritage, the City's premier architectural preservation organization, sent a letter yesterday to Planning Department staff stating that the plan for the preservation of the Valley Street Earthquake Shack cottage "does not address... national criteria for historic preservation and rehabilitation...

"Preservation Architect Michael Garavaglia," continues the SF Heritage letter, "has outlined a number of concerns regarding the Valley Street Project Sponsor's April 2022 'Historic Preservation and Relocation Plan.' We believe that Mr. Garavaglia's comments and recommendations are reasonable and valid, including the suggestion that qualified professionals are included in this project."

The Planning Department staff promised over a month ago to respond to Mr. Garavaglia's concerns. To date, that response is not in evidence.

Schrader's latest plan is still to attempt to move the two Earthquake Shacks at 369 Valley Street forward on the lot, raise them 5 feet, and then set them down on a new structure. He wants to demolish everything behind the Earthquake Shacks, do extensive excavation into the bedrock on the site, and build a nearly-4,000 square foot monster home.

The "Historic Preservation and Relocation Plan" that the project sponsor has produced is far from adequate. More on that soon.

Meanwhile, Planning Department staff has rescinded the previous CEQA exemption they had issued. They say they want "to take a closer look at the proposed excavation."

The Planning Department staff has also decided that there is no need for a Conditional Use Authorization hearing, as the demolition of the structure behind the Earthquake Shacks doesn't count as a demolition because there supposedly weren't permits to build it in the first place.

They are talking about scheduling a variance hearing in February, but we will see.

We have learned that the Planning Commission hearing, most recently set for November 17, has been postponed again. We do not at this point know when the hearing will happen. We said last week that this project was not really ready for a hearing yet, and apparently we were right.

As far as we know, John Schrader of Nova Designs Builds still wants to move the two Earthquake Shacks at 369 Valley Street up off the ground, and then plop them down on top of some new structure farther north on the lot. This is the same speculator who back in 2014 claimed that there was only one Earthquake Shack on the property, and that it wasn't worth saving. Whether or not the Earthquake Shacks would even survive Schrader's tender loving care is an open question. But there is no question that this plan would destroy the visual integrity of these two Earthquake Shacks.

Please click here to see "Cottage Lady" Jane Cryan's heartfelt letter in support of the preservation of these Earthquake Shacks.

What exactly is going to happen next remains veiled in confusion. Schrader has a plan for a monster single-family house on the table, as well as a "conceptual" proposal for a two-unit building with monster units. The hearing might be a Conditional Use Authorization (CUA) hearing because of the amount of demolition he wants to do, or it might not, depending upon still-unclear calculations. Schrader will definitely need a variance because he wants to build deep into the rear yard area. There is no up-to-date geotechnical study to support the amount of excavation he wants to do.

Please check the website for updates. We will let you know what we know when we know it.

WHAT'S THIS ALL ABOUT?

John Schrader of Nova Designs and Builds bought the home at 369 Valley Street in 2014.

The front part of this home is two Earthquake Shacks, one of the few survivors of its kind.  It is a living example of the resolve of San Franciscans to persevere under extreme adversity.  It is officially listed as an Historic Resource by the Planning Department.

Next, Schrader asked for permission to move the shacks to the rear of the property, behind a planned monster house, where they would be out-of-sight and out-of-mind.  It is questionable whether or not the shacks would have even survived this move.  The Planning Department once again turned Schrader down.

Schrader's next proposal was to demolish one of the Earthquake Shacks, move the other shack to the front of the property, and put it up on a "one story pedestal."  And, of course, build a monster house on the rest of the property.  The Planning Department turned him down again.

In 2017, Schrader came up with a new proposal.  He wants to put the two Earthquake Shacks up on some kind of pedestal, and turn them into a 1st floor "office" over a to-be-constructed "laundry, mechanical and storage basement" of unclear height.  Would the Earthquake Shacks even survive this reconstruction by a real estate speculator who has repeatedly demonstrated his utter disregard for their value to the history and people of San Francisco?

Of course, Schrader's real plan is to stuff a new, 4,000 square foot monster house in the rear of the property, behind the Earthquake Shacks.  Shrader has applied for a variance in order to build in the normally-required rear-yard open space.  The proposed monster house would reframe and overpower the view of the Earthquake Shacks from Valley Street, rising above them in the rear like, well, a monster.  It would also reframe and overpower the rear yards of neighbors on Valley Street and 29th Street.

Schrader laughingly claims in his variance request that his proposed project is "minimal in scale."  He waxes poetic about the need for "a real single family residence, which is much needed in this City."  As if what San Francisco and Noe Valley need is another 4,000 square foot monster house for some incredibly rich "family."

The truth is that Shrader is just another real estate speculator trying to make a few million by trampling on San Francisco's history and neighborhoods.

We have not heard much of anything from Schrader since he made his 2017 proposal.

Now, as reported above, the project has resurfaced and there is a Planning Commission hearing in the works for November 17, 2022. Please stay tuned.

In early October, 2017, all of the neighbors surrounding 369 Valley Street sent a letter to the Planning Department opposing Schrader's latest plans.  The letter, which follows, sums up the situation very well:

We, the immediate neighbors of the two Earthquake Shacks and the proposed building project at 369 Valley Street, are strenuously opposed to the variance requested by Mr. John Schrader and the building plans that Mr. Schrader’s company, Nova Designs and Builds, has submitted along with this variance request.

The requested variance and the plans would substantially and negatively impact the privacy and sunlight of the neighbors on all sides of this property.

We support the preservation of the two Earthquake Shacks on this property.  They are an important Historic Resource and a living example of the resolve of San Franciscans to persevere under extreme adversity.  They are a part of our neighborhood and of San Francisco history.

We believe that if it is Mr. Schrader’s intention to demolish the structure to the rear of the Earthquake Shacks, then there should be no new building in the required rear yard area of this lot.  We feel strongly that the rear yard building code for RH-2 zones should be enforced to protect privacy and sunlight of adjacent neighbors that have not exceeded code requirements.

Further, we believe that Mr. Schrader should not be allowed to increase the height of the home on this property above its current height.  Any attempt to build higher in the rear would overpower the setting and view of the Earthquake Shacks.  We agree with the findings of the Planning Department’s Historic Resource Evaluation Response of May 29, 2015, that:

“…the distinctive characteristics of Earthquake Shacks, including their unique size, scale, and dimensions, are still identifiable in the subject property… 369 Valley retains a strong sense of feeling as it still retains the aesthetic of a very small-scale cottage that has been fabricated from two Earthquake Shacks.  The dramatic shift in scale in relationship to the surrounding neighborhood is what sets apart the subject property from the neighbors and it is this aesthetic that hints at its unique history…  Although the rear addition does not contribute to the significance of 369 Valley Street, it does not detract from the character as it is relegated to the rear of the subject property and is largely invisible from the public right-of-way.”

We also do not believe that Nova Designs and Builds should be allowed to attempt to raise the Earthquake Shacks up on some kind of pedestal.  We are concerned that Mr. Schrader’s demonstrated contemptuous attitude toward the importance of this Historic Resource might lead to an “accident” during construction that would imperil the integrity of the Earthquake Shacks.

Mr. Schrader knew full well when he bought this property that he was buying an Historic Resource that needed to be preserved.  Any improvements made to the property should respect the historic resource and should be built without variance to code that negatively impacts the property’s immediate neighbors. Mr. Schrader’s misguided and miscalculated business decisions should not be used as an excuse to so negatively impact the neighborhood and the people of San Francisco.

MORE MESSAGES FROM SAVE THE SHACK SUPPORTERS: 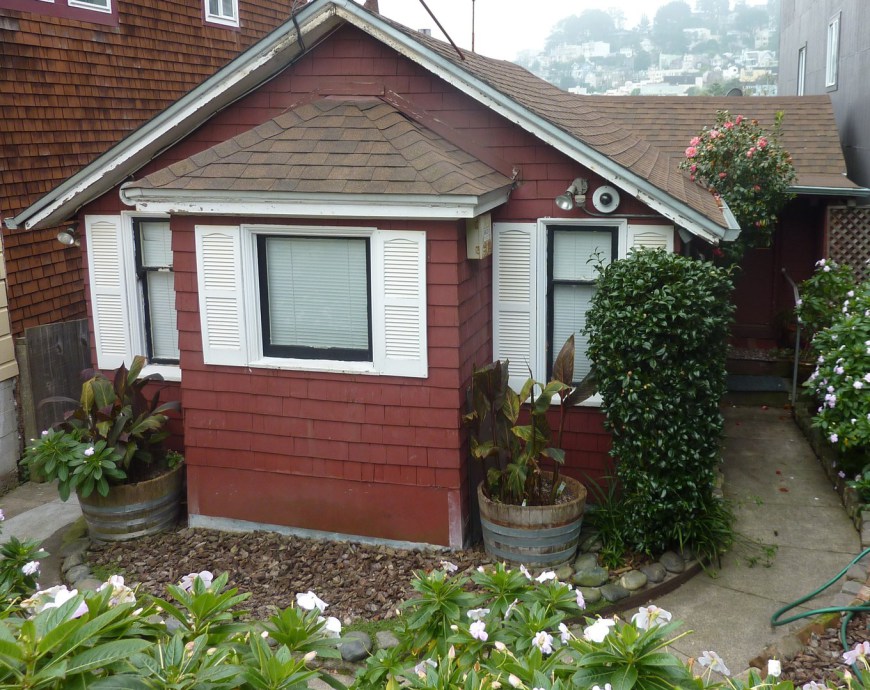